What kind of Faith do we need?

The religious community “Crossing” took an active part in “Christmas Readings” (the 27th of January – the 2nd of February, 2008) organized annually by the Russian Orthodox Church. To commemorate this, “The Sixth Sense” is publishing two speeches: one made by the head of the autonomous non-profit organization “Crossing” and the assistant to governor of Nizhny Novgorod Oblast, Alexander Notin; another – by the community’s prominent activist and Orthodox writer, Vasily Irzabekov.

WHAT KIND OF FAITH DO WE NEED?

Taking into consideration “Crossing”’s experience in this respect, I would like to direct general attention to the problem of forming and influencing the mass consciousness of young people by Orthodox religion. Why? The point is that studies of mass consciousness evolution in contemporary Russia are quite often accompanied by a dangerous confusion regarding conceptions of “culture” and “faith” (unfortunately, this tendency is also present in some of the speeches that have already been made here, during the Christmas Readings). Faith inconspicuously takes a back-seat, almost evaporating completely from our lives, while external manifestations of our reflections, worries and forecasts concerning the endlessly varied problems of youth culture as well as its’ various attributes take central stage: drugs, slang, aggression, nihilism, eclectics and challenging everything humanly possible. A “degrease of interest” in traditional religion on the part of young people is, of course, not forgotten but is considered just a detail of the general picture. Religion is slowly but consistently becoming a simple element of culture, something traditional, antique, somehow dear and moving but completely foreign to everyday life.

Nevertheless, this is no laughing matter. Or a private one, for that matter. No, “decisive” would be closer to the truth. Culture is an external, prominent and easily accessible to the keen mind of an observer manifestation of spirituality of a man, a group, a small community or even the whole humanity. Only then can religion be remotely considered a cultural phenomenon, not vice versa. There is painfully little room for religion in the large body of contemporary culture, more so in the époque of postmodernism. No, bring on counterculture, disbelief, atheism and other cultural surrogates! It would be a grave mistake to consider for a fact that the young generation’s nihilism and aggression convey their warlike disposition towards religion or faith. Not at all! We are faced by an intuitive defensive reaction towards an acidic environment where a more or less healthy young soul is forced to survive. That’s right: an aggression, albeit unconscious, towards contemporary culture! That’s why we can be safely compared to a homeless person who is searching for something edible in a nearby dump when we are experimenting with mass culture, searching for something that could help us understand the reasons for its’ degradation. There is literally nothing edible to be found on that dump, save for some leftovers! Thus, the root of all evil does not lie in culture itself; the latter remains just a consequence of the main problem which is to be found in a different place: in the depressed and oppressed state the collective spirit of the nation finds itself, so to speak. This is where the sickness originates from, striking all external forms of life, including culture.

Because they are much more sensitive (than adults) to the absence of a much needed cultural base and, consequently, a sure future, young people are suffering, languishing, scared, losing themselves. We have grown used to dutifully acknowledging such “facts” of contemporary life as the great social depression which is clear in the unwillingness of many to work, vote or bear children; the universal deadlock of science obvious in the absence of breakthroughs and achievements appropriate to the challenges of time; the imminent ecological catastrophe; a global energetic collapse; unending and uncontrollable war and political problems and much, much more. Let us pray to God that there won’t be another universal flood.

Young people are the ones who will be living will all this! The desire to live is stronger than death. Their generation is instinctively understanding that the genie has already “escaped from the bottle” and that the global model of development has almost completely been drained of its’ reserves of stability and vitality. Why is the situation, then, becoming more and more sinister and dangerous, contrary to the assurances of politicians? But, most of the time, they are left without an answer. Something is preventing them from understanding the situation. What is it?

Seminaries of “Crossing” with a quite politically aware, rational and vanguard young audience in Nizhny Novgorod – “Nashii”, “Young Guards” – have clearly shown: there is a huge but unfulfilled demand for healthy thoughts in these circles. It’s our (the Orthodox community’s), not theirs, fault that the required knowledge and skills are not given in full to young people. Young men and women today, independent and pert on first sight, are in reality chronically depressed. Their inner pain and uncertainty are reaching such record-breaking numbers that a need for answers to existential questions outweighs even an inertial prejudice against religion and, in many cases, organized church. We openly declared that the presented methods of self-knowledge and strengthening were Orthodox in nature, and it should be noted that none of the kids protested or left the lessons.

The whole system of upbringing and education is centered on creating a one-sided, lonely and dependent person, in short, an atheist (as if Konstantin Ushinsky and the Great Russian educational system have never existed). But even the reserves of such a shallow ideology are almost completely exhausted which is especially clear in the context of surviving today’s world. A normal person knows well that the whole world is being turned upside down and that he/she him/herself is destined for bestiality and oblivion with the end of the world, if he/she doesn’t make a final stand to change the existing situation and his/her role in it. This effort brings the searcher of truth closer to the second and most important realm of humanity’s nature: its’ soul. 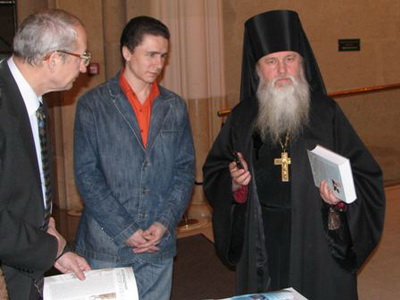 Russian youth is a carrier of many striking traits of national character. This is especially obvious in the natural shyness of Russians in the face of God who is always close to their hearts; and in the subtle, sensitive need to understand God. These traits have nothing to do with our notorious alcoholism and laziness which are simple consequences of Russian secession from faith, an instinctive protest against everything that makes a Russian truly Russian, against sinful and atheist reality (Silouan the Athonite).

Everything seems perfect: our audience is well-prepared for the perception of Orthodox ideas. And yet, obvious reasons are nowadays preventing the urgent spiritual transformation, renewal of Russian people in every way possible. Let us consider the following question: why is the political power, while triumphing in all other spheres of Russian society – politics, economics, finances, culture itself – is showing remarkably poor results and even passiveness when it comes to creating the spiritual aspect of the nation’s character? Only spirituality is left completely to its’ own devices and to the despotism of market economics. National broadcasting and communications are freely polluted by filth. Not only the omnivorous Internet but also the “proper” federal channels, obviously a part of the power vertical, are filled with vulgarity and profanity. The atheist soviet regime was, at the very least, proclaiming God’s commandments as the fundament of its’ new society, while nowadays every dark corner, every alluring light of ads and every newspaper announcement contain temptation and a death-warrant for an innocent soul. There is no other example in the world’s history when the advent of evil would reach such scale or cunning. This is not only proof of just how important are “the last days of Russia” and the Orthodox Church as the final point of resistance to the forces of evil. Consequently, it’s also proof of the huge potential that such resistance has.

Considering what was said before, we cannot rely exclusively on the rationality of authorities which, of course, will one day realize that a defeat in the spiritual battle is fraught by a loss of “passionarity” and the downfall of our country, our nation, our ethnic group and that it is more frightening than any external aggression. Russia is surrounded by ambitious and greedy neighboring states (not only the USA) which are simply waiting for the moment when our country, morally impaired, torn apart by corruption and internal conflicts, losing its’ population and shorn of its’ faith, would fall to its’ feet. What is the solution, if it exists?

There is a way to escape this fate and it lies in ourselves. We shouldn’t look forward to a spiritual and moral Renaissance of Russian society in the next five or ten years. Even if the people at power would awake from their slumber and rethink their strategy (and there are signs of this), curing the various deep wounds the spiritual character of the nation has sustained notwithstanding, a cleanup of broadcasts from various television magicians and spiritual charlatans would take years. In these circumstances the main aim of the Orthodox community is to educate the young people on how to develop their own spirituality. We are only left with the options of appealing to self-preservation and to the talent of understanding God which are a part of any young soul. Our work must not be limited by the marginalized classes, such as the bodily and mentally handicapped or the destitute where the Church and its’ allies are already well-represented, we must also work with school kids and students, politically active young people, in every youth sphere uncorrupted by the dubious values of western life. Let me repeat myself: young people in Russia are thirsty for knowledge on Orthodox spirituality which is their only means of escaping fear and pain in favor of the path of light, insight, salvation and love. They unconsciously require a revival of the Orthodox mission which could do away with neobarbarism and neopaganism. Spiritual destitution, ignorance, lack of knowledge about the heritage of the saints is a misfortune, but not the fault, of the young generation. They require our efforts, our prayers and our creativity to find the right forms of communication (a very rational desire, to be honest). We should talk with the young generation using their own language; support it with “warm spiritual milk” which Apostle Paul mentioned on many occasions. We must prove to them that true faith based on humbleness and love does not contradict contemporary science or life. Ushinsky said that “the best faith is the one that is congenial to human nature making possible unending and unselfish activity; that gives indulgence; that tolerates science and freedom of thought; that does not acknowledge any power over its’ conscience and that defends all; that, at the same time, does not impose or condone despotism; preserves historical tales; accepts freedom of will, not fatalism; in short, our sacred faith”.

Only by uniting the newest achievements of civilization (corrected by love for one’s own people and for nature) and by experiencing a profound and personal feeling of God which is only open to an innocent and true soul, will we be able to gain new resources, alternatives and revelations which, perhaps, will save a dying world.